As dictated by tradition, the students were led into graduation by Assistant Professor of Sociology Vickie Holland Taylor, faculty marshal, who carries the college mace as a symbol of the professor’s role and preeminence at modern institutions of higher education.

Following the processional, Jerri Jones, a DCC graduate in the information technology—networking program, performed an acapella rendition of the United States National Anthem.

“Graduates of 2019, this is a special day in your life,” said DCC Board Member Sheila Baynes during the invocation. “We rejoice over your accomplishments of discipline, determination, and hard work that led you to this proud day. You have been blessed to have teachers, mentors, and family to teach and guide you as you embark on this exciting next chapter of your life.”

“Class of 2019, we are here to honor you and to celebrate your accomplishments,” said DCC Interim President Dr. Betty Jo Foster as she introduced DCC Board Chair Christopher Eastwood.

“Ms. Linda Hutson Green, our commencement speaker, has served as director of economic development at the Institute for Advanced Learning and Research, as well as executive director of the Southern Virginia Regional Alliance, since October 2016,” Eastwood said. “She is also a DCC alumna and, as you can see from your program, she has had an exciting career. She most recently was honored as one of the 2019 DCC Outstanding Alumni for her accomplishments. Her success is a testament to the fact that each and every one of you, empowered by your accomplishments and the skills and knowledge you have gained through your education at DCC, can achieve.”

During her keynote address, Green spoke of the personal challenges she faced alongside being a student, highlighting the support she received from the faculty at DCC, and credited the combined support of her family at home and at DCC to her staying enrolled and realizing the dreams she had for herself.

“I stand here this morning in honor of you all,” Green said. “It’s each of you that will make a difference in this community in the days ahead.”

“I have gone on from DCC, through Averett, through Duke's master’s program, but always circled back to my community college, because that's what's going to be here and what you will be a part of for life,” Green said. “In economic development, the number one thing that industry representatives look for is in the center of this room: It's the students and the pipelines that they want to build for tomorrow. It's each of you. We can't do this alone and it's the strength of the students in these programs that they're looking at, and that's the reason companies come to this area.”

“Sometimes words like 'thank you' do not reveal the true feeling in the heart,” Ashe said. “If I could only open my heart and allow you to read the pages therein, then perhaps, in some way, you could know the true feeling that I have in my heart for receiving this honor. This institution has been and is near and dear to me. Mr. Shannon Hair, thank you for the nomination, and all others who agreed with you, including the chancellor, to make this possible.”

Ashe is a former DCC board chair and has had a personal hand in recruiting and encouraging many students to attend the college. She has also served in a variety of capacities for local organizations, including the Danville Concert Association, United Way, the Danville Museum of Fine Arts and History, and Social Services Advisory Board. She was most recently named as a new member of the DCC Educational Foundation Board.

Graduation scholarship recipients were then recognized by Shannon Hair, vice president of institutional advancement and development and executive director of the DCC Educational Foundation.

DCC’s summer session classes begin on Monday, May 20. The fall 2019 semester begins on Thursday, August 22. The final week to register for fall 2019 classes is August 16 through August 21.

Danville Community College is a two-year institution of higher education under the state-wide Virginia Community College System. DCC's service area includes the City of Danville, Pittsylvania County, and Halifax County. For more information about the college’s more than 100 programs of study, visit www.danville.edu.

Graduation was broadcast live on DCC's website and on YouTube and can be viewed by pressing the play button below. 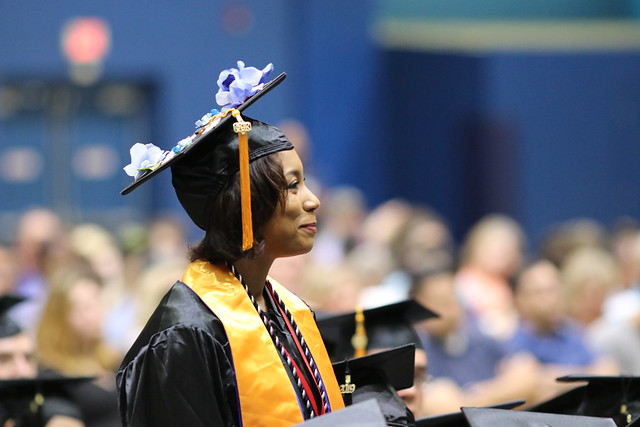